APPENDIX AND
ACKNOWLEDGEMENT
This publication was informed by research conducted by Dr. Annie Harper (Program for Recovery and Community Health, Yale School of Medicine) and Dr. Tommaso Bardelli (New York University). Funding was generously provided by the Fahs-Beck Foundation for Research and Experimentation. Thank you to Anderson Curtis of Smart Justice/SCLU, Daryl McGraw of FormerlyInc, Tiheba Bain of Women Against Mass Incarceration-CT, Jennifer Mellon, Steve August and others for their expert guidance. For further information please contact annie.harper@yale.edu.

As community members we ask what can people involved with the criminal justice system do to reduce the impact of debt on their lives when they return to the community after incarceration?

This resource can be used as a guide to organize and simplify the complicated task of navigating the criminal justice system.

And, it can also function as a checklist of tasks people can prioritize before, during, and after incarceration to reduce the impact of debt in their lives.

While we acknowledge there is no “clear solution” to the problems presented by the criminal justice system.

Hopefully this guide can be of help in dealing with the repercussions of an unjust system.
Designed by Avery Youngblood and Herdimas Anggara. Typeface "Good Sans" by Good Type Foundry.


AFTER RELEASE
After release, there are things you can do to manage and lessen the impact of any debts you have as you are moving on with your life in the community. You can also look at this helpful guide created by the Consumer Financial Protection Bureau.

In the months after his release, Alejandro was making considerable headway towards greater stability, helped by a full-time job as a valet parking attendant.

Because he was living in his sister’s apartment, he was able to save some money, as he made plans to get his own place and hopefully purchase a car, which would allow him to find a better job.

Yet, the closer he got to his goals, the more of a financial mess he seemed to be in.

Before he could buy a car, Alejandro had first to recover his license, for which he had to pay various unpaid parking tickets and DMV fees.
To be able to get a car loan one day, he would need a higher credit score. Improving his score, in turn, required paying off the utility and other debts he owed, such as child support, a bank overdraft and back taxes.

As thesefinancial barriers to achieving his goals kept coming up, Alejandro’s mental health suffered, as did his relationship with his sister, and he found it increasingly difficult to maintain his sobriety.

Reinstate benefits.
Get your benefits reinstated if applicable. SOAR is a useful resource for people with mental illness.

Seek mental health support if needed.
Seek help with mental health or addiction recovery if you need it, from Advocacy Unlimited or CCAR.

Get advice from peer experts.
Peers – people who’ve been through it themselves – usually give better advice than anyone else. This can be particularly helpful with managing spending and budgeting in the first months after release. Organizations that can help include Formerly Inc., Women Against Mass Incarceration, and Reentry Roundtables across the state.

Get professional financial advice.
Free financial counseling is available in many CT cities to help fix your credit and other financial problems, such as the Financial Empowerment Center (FEC) in New Haven, the Bridgeport Neighborhood Trust, and the Village Financial Resource Center in Hartford. LISC-CT is also opening a center in Waterbury.

Rebuild your credit.
Open a utility or cell phone account and PAY ON TIME. You could try a secured credit card, or a credit-builder loan – nerdwallet gives good advice. Some CT banks and credit unions offer credit builder loans (Google can help you find them).


DURING INCARCERATION
Even if you weren’t able to take steps to put your finances in order before incarceration, there are things you can do from prison to make sure that you aren’t overwhelmed with financial problems when you get out.

About one year after his release, Carlos was still struggling to make ends meet: he and his wife were working minimum-wage jobs with irregular and unpredictable hours, while caring for three young children.

When he was finally offered a full-time position at a landscaping company, Carlos figured he needed a mobile phone, but found that he could not get one due to several hundred dollars he owed to a cable company, for bills incurred while he was in prison.
Around the same time, Carlos realized he also had another debt he knew nothing about, $900 to the electric company. Realizing he must have been a victim of identity theft, Carlos made a report to the police department.

There he was told it would likely take months to solve the issue, and Carlos needed the phone now.

He had no choice but to pay the bill himself, further straining his household finances.

Arrange for someone else to manage your finances.
Arrange a power of attorney from prison to manage bank accounts, etc.

Freeze child support.
If you owe child support and you haven’t already modified it, do it now by completing and mailing a simple Incarcerated Parent Request for Review application to Support Enforcement Services.

Keep an eye on your credit.
You can get a once yearly report from prison, for free. You will need to mail in a request for the report, including a notarized letter from the warden or other authorized personnel and mail it to: Annual Credit Report Request Service, P.O. Box 105281, Atlanta, GA 30348-5281.

Plan to save.
Try to set aside some money either in your commissary account or ask someone you trust to open a deposit only savings account so that you have something when you are released.

Educate yourself.
Attend money management or financial literacy classes if they are available. Read money books that others recommend.

Prepare to get your ID.
Talk to your case manager or counselor about sending a notarized letter to a trusted person to get your birth certificate and social security card.

Prepare to get your benefits reinstated.
Ask your counselor or call Social Security directly at 1-800-772-1213.


AFTER ARREST AND/OR
BEFORE INCARCERATION
Getting arrested and sentenced can be a distressing, chaotic time, and it can be difficult to put your finances in order before being incarcerated. But there are some things you can do to reduce the financial problems you might face when you are released.

When Shanice was arrested, the last thing she thought to do was call the electric company to cancel service at her one-bedroom apartment, which she shared with her boyfriend. It wasn’t easy to do from the local jail even if she had wanted to: phone access was limited and calls extremely costly.

Also, her boyfriend was still living in the apartment, and Shanice saw no reason to let him go without lights.

Shanice also didn’t think about her bank account – she just hoped she’d have some money left in it when she came out.

After release, Shanice’s decisions came back to haunt her.
Her ex-boyfriend had ‘run’ with her electric account for as long as he could until the lights were shut off, leaving the balance unpaid.

When Shanice came out of prison, her bank account had gone overdrawn due to monthly fees and the bank had closed it, her credit was ruined, and the utility company wouldn’t open a new account until she paid the arrears, making it impossible for her to find a landlord in the city who would take her housing voucher.

Get help with bail.
CT Bail Fund may be able to help, if you or a loved one can't afford to post bail. Email info@ctbailfund.org for more information. They are usually only able to help if bail is $5,000 or less.

Check your credit.
Get a copy of your credit report (free from Annual Credit Report or Credit Karma) so you know what outstanding debts you have.

Pay or negotiate outstanding debts.
Depending on your length of sentence arrange to keep making payments on your debts. If your sentence is three years or longer it may not be worth making payments–after seven years many, though not all, unpaid debts will no longer affect your credit score. Note that prison or jail time is not reported on your credit report.

Avoid car/home reposses-
sion or foreclosure.
You can try to sell the car/home, request a settlement in lieu of repo, arrange for someone else to continue making payments or contact the lender to try to negotiate temporary forbearance or a manageable payment plan.

Manage student loans.
Arrange for student loan deferral or forbearance while you are in prison or opt for an income-driven repayment plan which could reduce your monthly payments to $0 if you have no income. Contact your loan servicer to make arrangements. For more information see the government student aid website.

Move out of your apartment.
If you need to give up your apartment give notice to your landlord, move out and turn over the keys. Get a receipt from your landlord to show that you have done so. Your landlord can continue to charge you rent for the duration of your rental lease, but if they can find someone else to move in, or they agree to end the lease, then you’re off the hook. If the apartment remains unrented your landlord can sue you, or if your landlord evicts you it will be much harder to find an apartment when you come home. If you have a written lease and the landlord agrees to end it early, get that agreement in writing.

Cancel utilities/cell phone.
Cancel your utility and cell phone accounts or change them to another person’s name, to avoid the risk of unpaid bills or identity theft from sharing your personal account log-in information with someone else.

Avoid bank fees.
Consider transferring funds to a savings account or an overdraft fee-free account such as KeyBank Hasslefree.


DEBT & INCARCERATION
A COMMUNITY GUIDE FOR CONNECTICUT
When you return to the community from prison, you may have to deal with debts and being behind on bills, which can be stressful and get in the way of successful reentry. People who are incarcerated often have debts even before they go to prison, and those debts can get worse, and additional debts pile up, while a person is in prison, and as they deal with the reentry process after release.
This guide outlines steps that you can take before, during and after incarceration to try to avoid these financial issues. 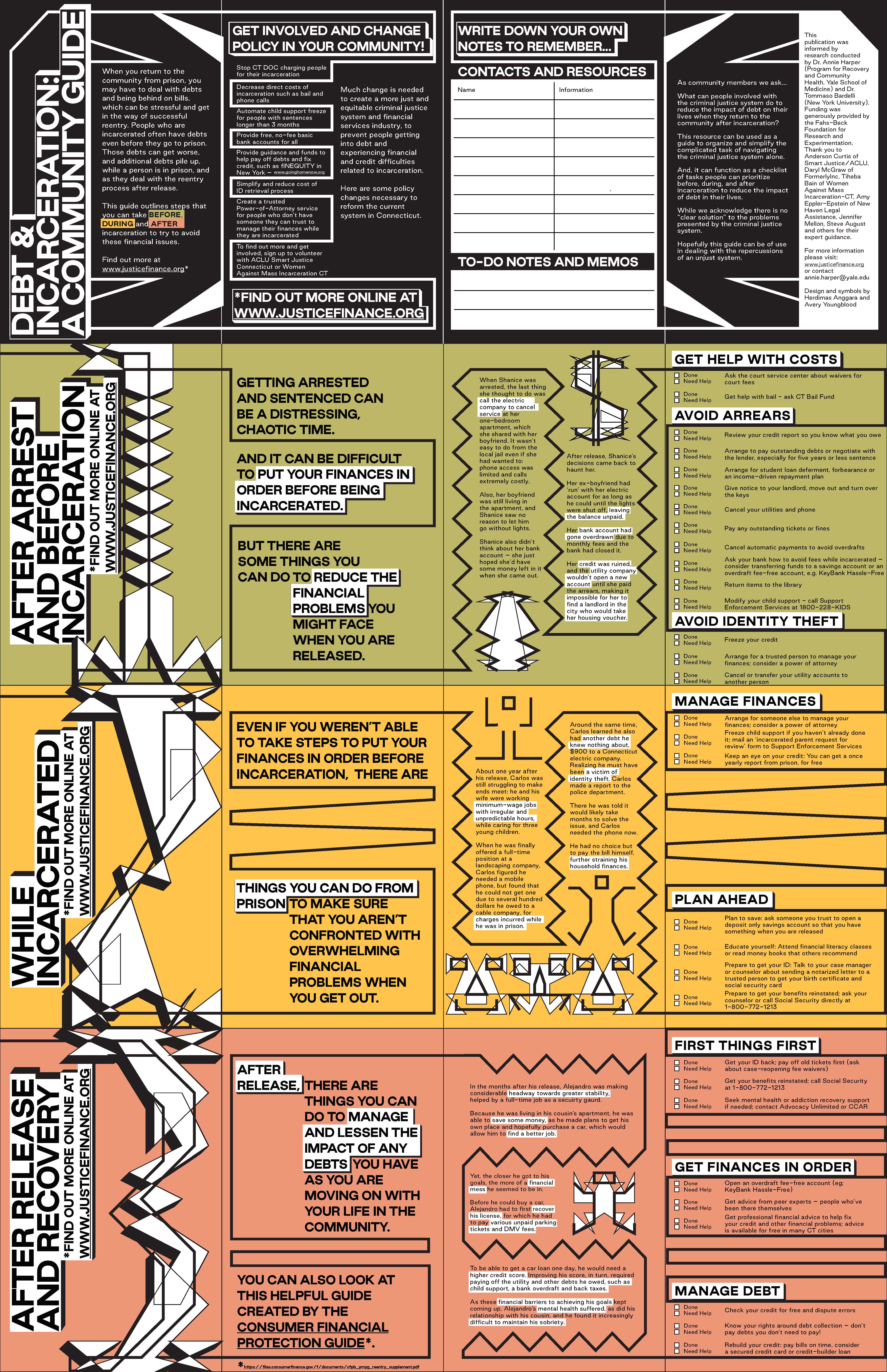 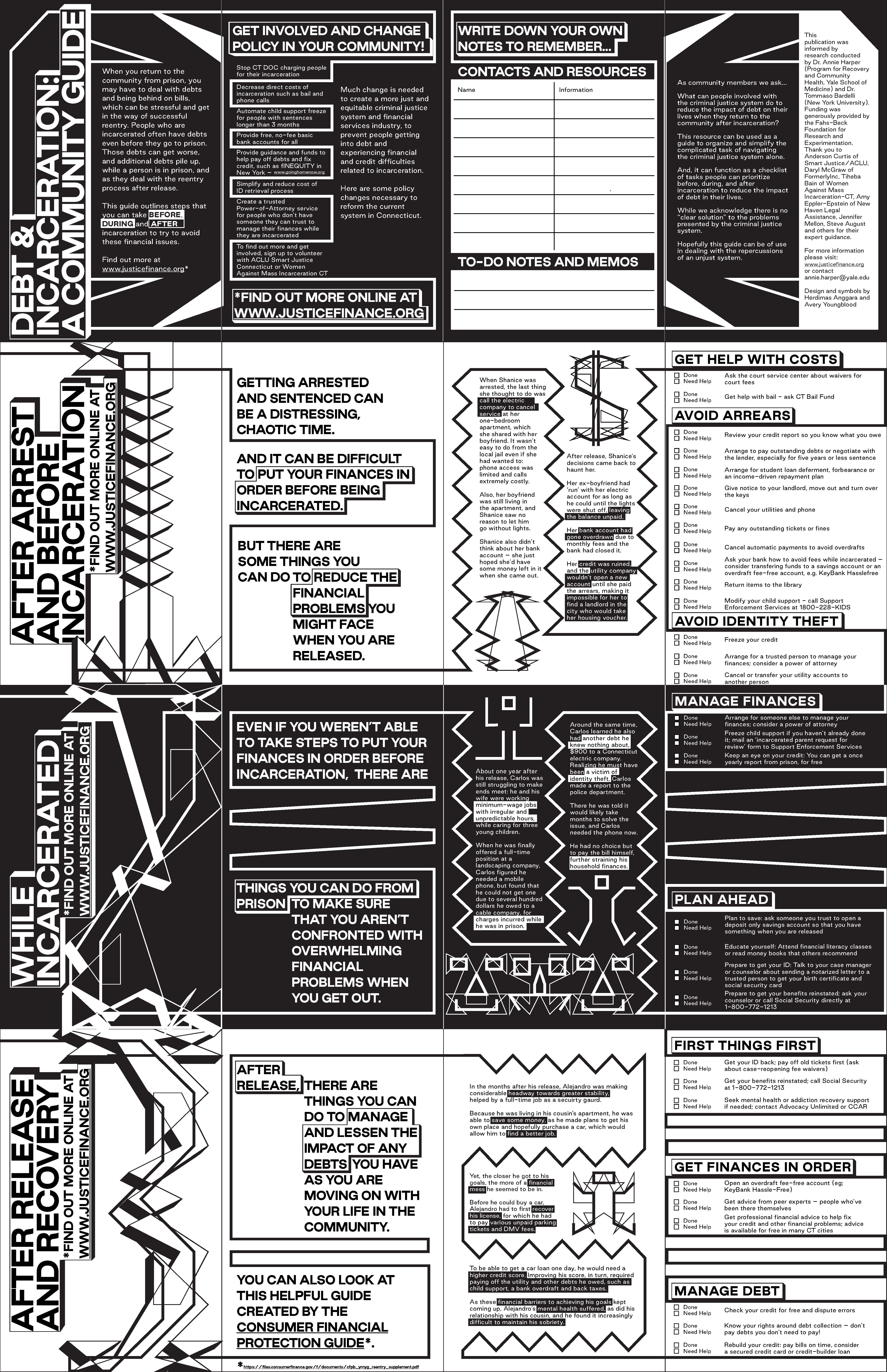 You can also print in the form of a brochure – print out the pages here and staple them together.

Much change is needed to create a more just and equitable criminal justice system and financial services industry, to prevent people getting into debt and experiencing financial and credit difficulties related to incarceration.

Here are some policy changes necessary to reform the current system in Connecticut.
To find out more and get involved, sign up to volunteer with ACLU Smart Justice Connecticut or Women Against Mass Incarceration CT.